The National Meat Inspection Service held recently the 2020 Social Preparation Orientation Workshop (SPOW) for the Bayanihan 2 Project to Heal as One Act beneficiaries via Zoom.

The recipients of the project are two local government units: Tanauan in Batangas and Malagos in Davao and two institutions: San Jose Workers’ Multi-Purpose Cooperative in Batangas and Pampanga State Agriculture University.

In his introduction during the SPOW, NMIS Executive Director Dr. Reildrin G. Morales explained that the budget for the project is provided to increase the margin of income of farmers and animal raisers.

He also mentioned that the beneficiaries were chosen because their areas are centers of agricultural trade and are near major markets of the provinces. Establishing either cold storage warehouses or meat cutting plants in these areas are considered strategic.

NMIS Deputy Executive Director Atty. Beata Humilda Obsioma discussed the contents of the memorandum of agreement. She also reminded the beneficiaries of the requirements and deadlines of submissions so the budget can be downloaded to them.

A one on one discussion with Engr. Jon Knox Kasey Tkel, head of NMIS Engineering Unit and staff of Project Management Office and recipient of each of the project to orient them on the specifics of engineering plan and other relevant requirements in building meat establishments was scheduled on a later time.

The SPOW is organized yearly to orient the beneficiaries of Meat Establishment Improvement Program (MEIP) and in the case this year, those recipients of meat establishment program under the Bayanihan 2 Act.

The activity was organized by NMIS-Meat Standards Development Consumer Protection Division with the assistance of Planning and Information Management Division and Project Management Office. 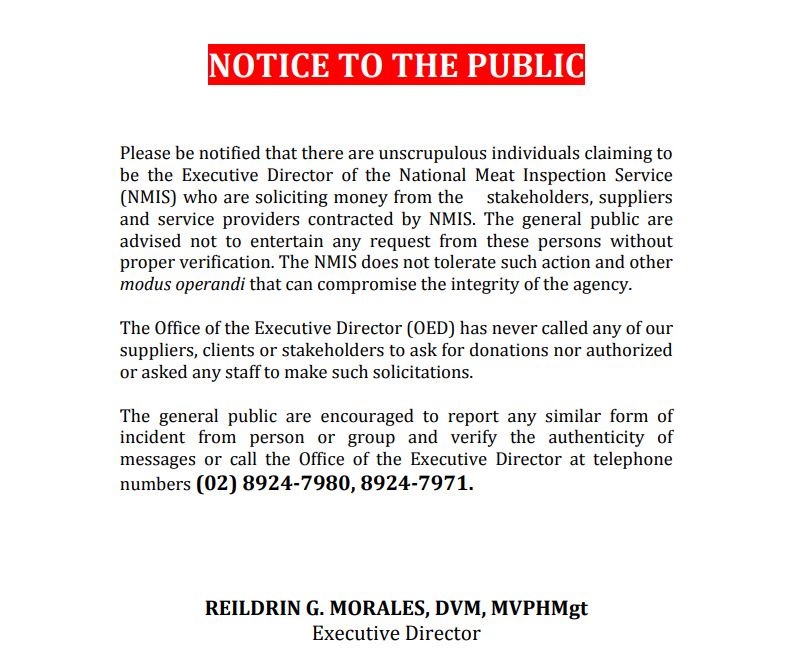